skip to main | skip to sidebar

Robotics Projects and Hackz. These are exercises in Learning; the potential strengths and weaknesses of our future Overlords- Robotics' operational parameters, if you will.

Want to really mess with the Mind of a Furby- then go right for its neural homeostasis control center (the main CPU clock speed):

Instructables details of this hack
Posted by biobot at 10:42 AM No comments:

The Furby 2012 has a single DC motor that drives everything that moves.  The motor can be run continuously either forward or backwards.  There is a physical contact switch to determine the "home" position- when you wake a "normal" furby, it will do a wake up routine no matter what (with the familiar "Di Aylo Aat Too" good morning sound. This wake up routine finds and sets the home position. (can be adjusted using the set screw on the rear- it has red glue on it). The direction and exact amount of movement is monitored by the motor encoder- an optical rotary quadrature encoder.  You can see the encoder board in the photo below. 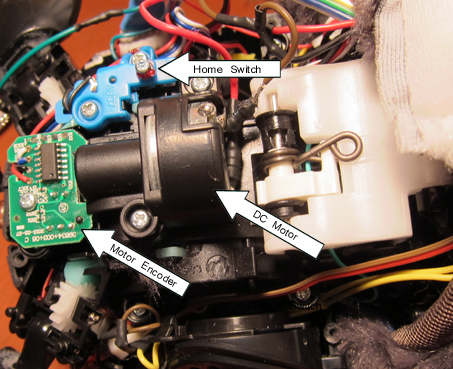 A crude control can be obtained from simply using the home switch and PWM for speed control using a motor controller like the one shown below from Pololu (it happens to be a dual motor controller). 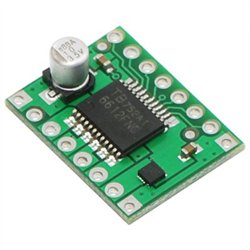 The encoder board, front and back, are shown below.

Not pictured is the rotary wheel that passed between the emitter (LED) and collector (photo) diodes.  A complete circuit diagram is shown below (note the blue wire is ground, red wire is Vcc (5v), white and black wires are the two channels of the quadrature encoder: 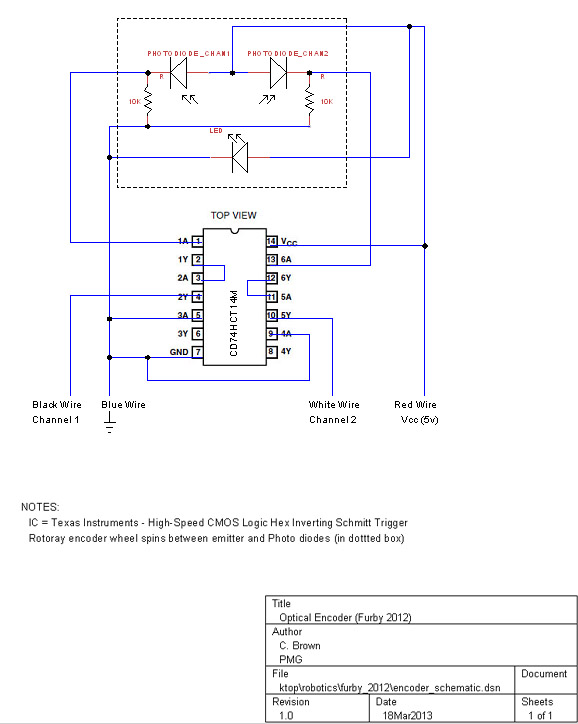 The chip used is a TI CD54HC14 (data sheet)- essentially a bunch of Schmitt triggers. 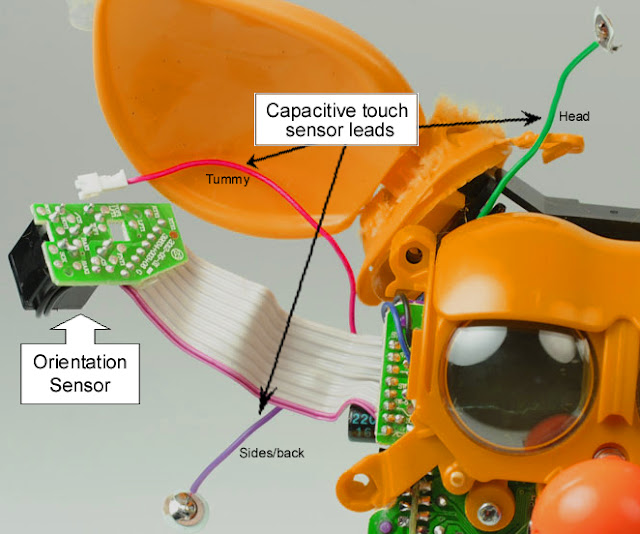 One question is how much control can be achieved via stimulating these various sensors.  Can the eyes be controlled to look in a particular direction (via tilt sensor); Furby will look up when the head capacitive sensor is stimulated.

Using a solid state switch that is activated via TTL, the Furby can be modded to do some weird shit:

The green light is from the Arduino pin 13 LED, the white light signals the solid state relay firing.  PIR sensor in front. Red LED stays on for a while after motion detector is first triggered. When LED goes out, any motion will trigger the solid state relay (white light flashes 2-6 times, indicating relay switching 2-6 times- currently attached to the tongue sensor).  With no motion (or other stimuli) for 2-3 minutes, Furby goes into sleep mode again. 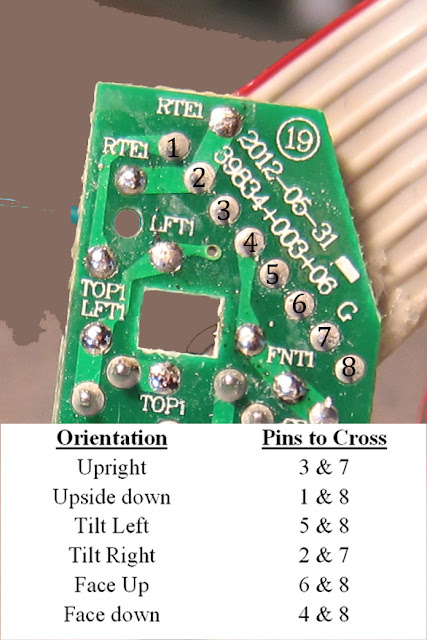 
After too much continuous stimulation
the little beast has just about had it.
Thank god it was securely tethered the whole time.

The Furby is back and has some pretty cool LCD eyes. 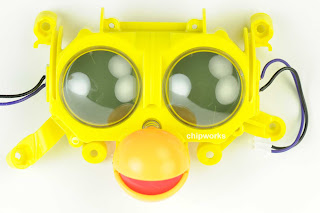 First order of biz is to wire the little beast up to dedicated power and put a volume control on the speaker. 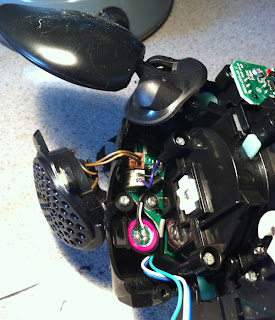 Simply unplugging the brown wires from the board, add a potentiometer between one of them and the speaker, and slip it all back together again.

Power is provided by 4 AA batteries providing 6 volts or so.  Total voltage needed is likely the familiar 5 volts, and the total current drawn by the Furby around 500 mA peak (when all the motors are gearing), so USB-type power supply will work (max USB output is 500 mA).

The best way to activate the Furby from sleep mode seems to be depressing the tongue.  A sensor (or two or three?) ar under there and some the pins from the sensor board can be accessed from the underside of the mouth.  Three of the most prominent pins got tapped (soldered a 3-wire ribbon cable to them) and one of these seems to wake the Furby when grounded.  Now the Furby can be activated using a simply switch, or... using TTL level with a solid state relay.

Next up is hooking a Arduino up to control (or at least wake and auto "feed", "tickle" and "pet") the Furby.  Capacitance sensors are located on the top of the head and around the body to detect petting and tickling/holding respectively.

Harbinger of the Robot Apocalypse?

Maybe not, but would be freaky to first hear of the Robot Apocalypse from this type of animatronic feed reading robot head!

RSS feed reading robotic chimp-machine hybrid made from a wowwee chimp head and a serializer WL parasite board.

Others have covered the general hackings of the chimp, but here I add realistic mouth movement synced to an automated RSS feed reader.

Mouth animations are done using the viseme stream data which encodes mouth shape and phoneme length. This in turn used to control a servo in the jaw. TTS stream from an RSS feed updated in real time. For this demo the keywords were robot and drone.

Assimilation continues... the monkey-cyborg neuromuscular and sensory fibers tapped and CPU transition to the cloud Matrix has begun.

Peeling back the synth skin, some areas for improvement can clearly be seen.  Precision servo for one thing; maybe a trip to the dental hygienist too, she got some skanky teeth! 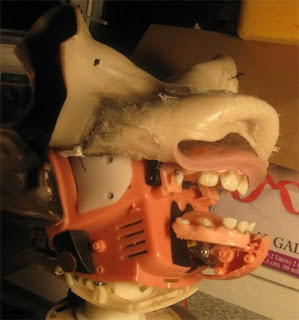 biobot
Hacking animatronics like the WowWee Chimp Alive, WowWee Elvis Alive and of course the annoying and in need of special "attention", the Hasbro Furby.